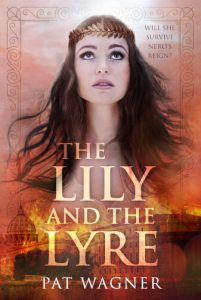 July 18, 64 AD—Rome’s great fire starts, and the capital city burns while Nero reigns. From that day on, Julia’s life changes forever. Still reeling from a tragic loss, she flees from her opulent home and fights to survive. Plumes of smoke rise from the chaos as crumbling buildings and screams of the dying fill her with terror

At last, she makes it to a field bypassed by the fire, but she’s not safe. More danger strikes.

And then she encounters Tribune Marcus.

Buy THE LILY AND THE LYRE 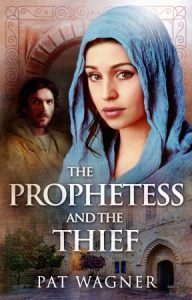 It’s A.D. 66, and supernatural signs fill the sky above Jerusalem. Almost everyone believes they reveal the Omnipotent One’s promise to deliver the Jews from the Romans. But fifteen-year-old Miriam senses catastrophe is coming . . .

To her, the signs warn the time is drawing near for the fulfillment of Jesus of Nazareth’s prophecy about Jerusalem’s destruction.

Personal tragedy comes upon her amid the approaching storm, and she fears her cherished secret ambition could be lost forever.

At the same time, Baruch, a young man who once admired her, now tests her resolve to forgive him.

If he and Miriam and her family don’t escape from Jerusalem in time, they’ll suffer with the rest of the Jews during the horror soon to come.

But if they leave their ancestral homes, what unknown dangers will they face in a foreign land?

Buy THE PROPHETESS AND THE THIEF

GOLD ON THE BLACK CAT TRAIL

Soon after the close of World War II, Sydney University student Rachel Denzing longs to recover the affluent lifestyle her father had provided for his family before moving them to Australia from Pasadena. She hates poverty so much she’ll risk all to trek through treacherous Papua New Guinea to find the hidden treasure she learned about when settling her parents’ estate.

She’ll risk even more danger by hiring the ex-convict playboy guide who knows the Black Cat Trail better than anyone else does.

He claims to have changed for the better, but how can she be sure?

Find out in this suspenseful novella.