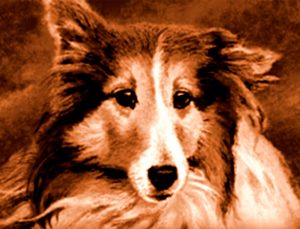 My husband and I love dogs, especially Shelties.

After one of our beloved pets died, we searched for another one. One day, while surfing the internet at a pet finder site, our new dog’s photo caught my eye. His picture seemed to say, “Please take me home. I’m so sad and alone.”

Charley had a very difficult life before we bought him. His first owner was a sheltie breeder who became so ill she took her seven shelties to a dog rescue. So Charley lost his home on that awful day and didn’t adjust to the new place. I think at the dog rescue he lost part of an ear. Perhaps he tried to steal another dog’s food.

Charley suffered from benign tumors and other health problems, so as a dog no one wanted, the pet rescue owner sent him to another dog rescue. The worker at the new place, where we found Charley, told us he was five, but he was much older. We fell in love with him, anyway. My husband laughed as he held him in his arms. I knew then that Charley was going home with us to join our other sheltie who was almost two years old. What a surprise for Max to discover that his new older brother would set up rules for him to follow. For example, when it was time to eat, Charley snarled at Max to scare him into giving him his food, but our new pet was a barrel on legs and needed to be thinner. To solve this problem, we had Charley eat in our storage shed dog house with the door closed so his younger brother could eat undisturbed.

When my dogs came to me wanting attention, Charley snarled at Max, warning him to get away. Then he would gaze at me with an angelic expression as though saying, “Aren’t I wonderful? Pet me.”

Charley had worms, so we paid a veterinarian to remove them along with several benign tumors. After a lot of tender care, Charley’s health improved.

We didn’t get to enjoy his company long enough. Near the end, Charley lost almost all his hearing and sight, too. But even in his last years, he learned to greet me with an outstretched paw for me to hold.

Memories of Charley remind me of a promise from God’s Word, the Bible. Although my husband and I are imperfect pet owners, we tried to provide the best care possible for Charley. This makes me think of Matthew 7:11. “If you then, being evil, know how to give good gifts unto your children, how much more shall your Father which is in heaven give good things to them that ask him?”