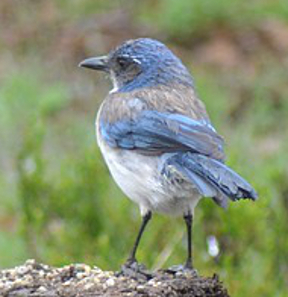 My husband’s friend, Kenny, lived in a tent in the mountains for a period of time. But that didn’t mean he sat around all day doing nothing. In fact, he was far from lazy. Daily he dug piles of dirt looking for gold in a beautiful area beside a river shaded by trees and bushes.

You might think he was lonely living alone away from civilization. But he made many friends—although not the type that might come to mind—human companions. Instead, he became friends with the birds. And not just any kind of bird.

His special buddies were California Scrub Jays, colorful blue and gray feathered companions. They flew near him, sat in trees while he worked, and chirped to let him know they were there and expected to be fed.

Kenny took small pieces of bread covered with peanut butter and held them up for his pals. They took the treats from his hand. One day Kenny ran out of bread, but he still had peanut butter. While my husband watched, Kenny put his finger in the jar and pulled out a big glob. A jay landed on his finger and ate the gooey morsel.

Another time Kenny was sitting in the shade feeding the jays. Suddenly they went crazy—squawking and making all kinds of racket. He got up to check on what was happening. When he looked around, he saw a large rattlesnake sliding through the bushes behind where he had just been sitting.

His friends, the jays, had warned him of the danger.

Kenny had treated the birds with kindness. His example reminds me of Matthew 7:12, the Golden Rule, that commands we treat others the way we want them to treat us.

He wasn’t expecting anything from the birds, but they repaid his kindness by warning him of the deadly danger right behind him.

This brings to mind another verse—Galatians 6:7. “Don’t be deceived; God is not mocked: for whatever a man sows (seeds he plants), that shall he also reap.”

So let’s make it our goal to sow seeds of kindness every day.